I first became interested in the Tarot deck after reading the graphic novel, Promethea, by Alan Moore while studying religion and mysticism at Harvard Divinity School. 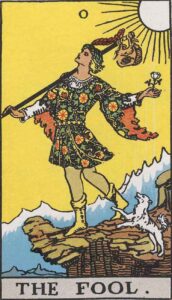 Where before, I had had the idea that the primary purpose of Tarot was divination (or      foretelling the future), I now came to understand that the deck could be used as a spiritual tool and was loaded with powerful symbolism borrowed from the Jewish Kabbalah and alchemical medicine.

The cards become, as it were, a mirror of the psyche that can reveal connections between parts of ourselves that we do not wish to see. Reading tarot accurately is not so much a supernatural science as one that involves opening up a space in which projection can occur and aiding the client in understanding what he or she has projected, why he or she have projected it, and how one’s projections will govern, shape, and control one’s life if one is unaware of them.